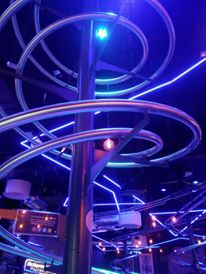 As I write the closing scenes of the novel I really meant to finish by the end of April, my mind has already moved on into June, when (in my imagination anyway) I will have published it, which means I will then have time to go back to the historical novel on my computer and change the ending to make more sense, and then on to July, which I have set aside for another trip to Pitkirtly. Although I sometimes have more than one novel in my head, I don’t write more than one at a time. It’s hard enough to keep track of characters’ names in one novel, for goodness’ sake. I don’t want to have another ‘dog with three names’ incident.

Looking back on April, it’s a miracle I got any writing done at all, what with the trip to Alton Towers for my ‘special’ birthday, the work of finalising the community centre lottery application, umpteen meetings and the self-imposed task of organising a writers’ event for a grandly named local ‘festival’. Not the Edinburgh Book Festival, I hasten to add. It’s just that anything going on in Edinburgh now has to be called a festival by order of the city council. Or maybe it just seems like that.

As well as slowing down my writing, these activities have also stopped me from finishing my current knitting project, or at least that’s my excuse. However this has the side benefit of meaning I don’t have to decide what project I should embark on next. For secret family reasons, I’ve bought a book of patterns for baby things, and as well as the basic cardigans, hats etc, towards the end it strays into the realms of the bizarre with patterns for a snail, alpacas and even ostriches. Of course I am strongly tempted towards the alpacas, although the snail is also weirdly fascinating. I expect you can tell that even although July is still a month and a half away, I’m already searching for excuses for not finishing ‘Pitkirtly XVI’ in a timely manner!